Who Is Cambodia’s Richest Man

He who owns real estate properties and telecommunications, if not the media sector. In this list, you’ll get to know a number of top tycoons of Cambodia. They’re some of the wealthiest Cambodian nationals of the Kingdom. During the Covid-19 pandemic, these Cambodian millionaires made donations after donations as the country struggled with the lock-downs.

What is Cambodia’s net worth? According to a Wikipedia article, it’s approximately $26.730 billion (nominal, 2019 est.).

Starting a Business in Cambodia?

Probably self-made man Neak Oknha Kith Meng is Cambodia’s wealthiest.
Royal Group is known to be controlled by a well-known and influential Cambodian tycoon. The business owner is tycoon Kith Meng, chairman of the Royal Group. Royal Group covers a wide range of key businesses in the Cambodian economy. It’s one of the largest investment companies in the Kingdom of Cambodia. For example, the company invests in telecommunications, transportation, energy, media, banking and finance, insurance, hotel and resort property development, education, trade, and agriculture. 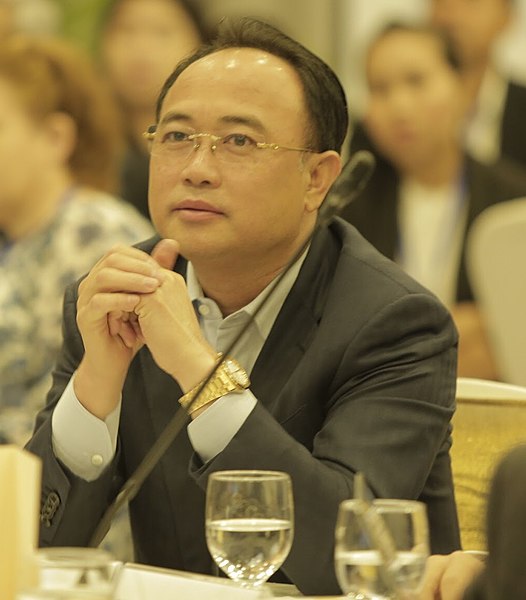 Canadia Bank and OCIC are a consortium of companies that are actively involved in investing projects of tycoon Pung Khav Se, the Chairman of Board of Directors and Managing Director.

OCIC is one of the largest companies that have been investing in a number of big real estate projects in Cambodia. Under the management of Pung Khav Se, the company invested billions of dollars in residential buildings and large commercial buildings in the heart of capital city Phnom Penh such as Borey Tonle Bassac, Botanic Gardens, Koh Pich, Olympia City (around the Olympic Stadium), Chroy Changvar Satellite City, Ratana Shopping Center, Phnom Penh International Airport (new), shopping malls, and condominiums.

Chip Mong Group has been expanding its investment in the construction of high-end housing projects. Chip Mong also has large factories for animal feed mill and cement. A number of prominent businesses include Khmer Brewery and many beverages. Products, construction materials, home decor and importing food products, and banking (Chip Mong Bank). Her Excellency Onha Madame Pheak Hak is Chairman of the Board of Directors of the Company and with the support of two well-known sons of Okhna Leang Meng and Oknha Leang Khun.

Under the leadership of Lok Chumteav Oknha Lim Chhiv Ho Since the 90s, Attwood has continued its prestige and built its business empire in Cambodia.

The company is well-known through the import and export of premium branded wine brands In Cambodia, such as Johnnie Walker, Hennessy, Kickapoo Joy Juice and Corona.

In addition, Attwood has invested in many special economic zones, such as Phnom Penh and the Poipet Special Economic Zone, which has been providing investment opportunities as well as job creation for Cambodians.

Also recently, the company has invested in building another large international school and plans to invest in the construction of a new center. Elderly people are coming too soon. Please note that besides staying strong in the Cambodian market, Attwood has also operated in Lao PDR.

L.Y.P Group is known as a parent company with no less than 10 subsidiaries. The company was founded in the 1990s by the founding tycoon Ly Yong Phat. As “King of Koh Kong” because he was originally from and built a business out of this province bordering with Thailand and was deeply rooted. Strong and expanding.

In addition to the hotel and resort industry, LYPO Group also invests in the infrastructure and utilities water supply in Koh Kong and Oddar Meanchey provinces. Meanwhile, the company also invests in agriculture, for example, Sugar Sugar Factory is investing under 200 million Dollar in Kampong Speu province, and investing in rubber plantations in Tbong Khmum.

The company also invested in the construction of a huge animal feed factory, costing millions of dollars. Aside from a successful construction company and palm oil plantation over 1600 hectares, Mong Reththy Group also operates on major businesses such as port in Sihanoukville. The company invests in millions of Dollars in rubber plantations growing and exporting mangoes, producing and exporting rice farms, pig farms, import and distribute machinery products for agriculture and engineering.

Under the visionary leadership of self-made man Sear Rithy, who started out a small logistics company so far, his Cambodian company is gaining momentum, expanding further and investing in various sectors in the real estate companies. He has been (co-)investing in condominium The Bridge, The Peak, and The Palm and affordable housing projects for the low income Cambodians.

The company invests heavily in a high-rise building Vattanac Tower in the heart of Phnom Penh. In addition, the Vattanac Investment owns Vattanac Bank, two Vattanac gardens, several factories and employs tens of thousands of people.

Known for his borey projects across the capital city (named after his name), the young rich man has made frequent media headlines for his donations and contributions during the Covid-19 period of time.